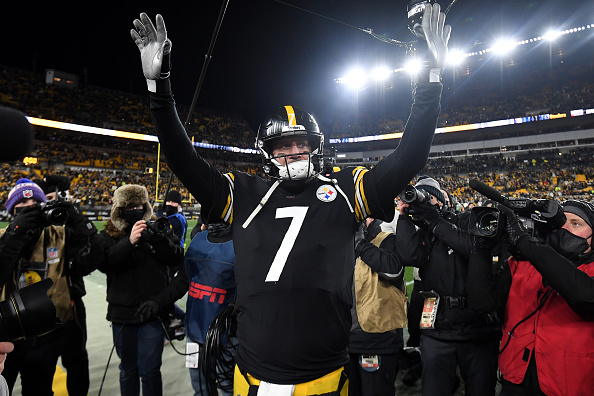 PITTSBURGH, PENNSYLVANIA - JANUARY 03: Ben Roethlisberger #7 of the Pittsburgh Steelers waves to the crowd after his final game at Heinz Field where he defeated the Cleveland Browns 26-14 on January 03, 2022 in Pittsburgh, Pennsylvania. (Photo by Justin Berl/Getty Images)

Ben Roethlisberger did not have a great night statistically against the Browns on Monday Night Football throwing for only 123 yards, with 1 touchdown and 1 interception, but he didn’t care, because the only thing he really wanted was a win in his final game at Heinz Field and he got just that, as Pittsburgh beat Cleveland 26-14 in the “Steel City”.

The victory kept Pittsburgh’s playoff hopes alive heading into the final week of the regular season.

The Browns received their fate on Sunday, as they were eliminated from playoff contention, regardless of what happened in the Monday night game.

Steelers rookie running back Najee Harris was the difference offensively in the game, as he rushed for 188 yards and 1 touchdown, while T.J. Watt anchored the defense with 4 sacks to raise his league leading total to 21.5.

Browns quarterback Baker Mayfield struggled all night. He completed only 42% of his passes, with 2 interceptions, 5 passes batted down at the line of scrimmage and was sacked 9 times. He did connect on 2 short touchdown passes in the game, one to David Njoku and the other to Harrison Bryant, but it wasn’t enough.

With their third consecutive loss, the Browns fall (7-9) on the year and will close out their season Sunday at home against Cincinnati.

The (8-7-1) Steelers will play at Baltimore, and must win and have the Jaguars upset the Colts to get into the playoffs.

Roethlisberger, from Findley, Ohio ends his career with a 26-3-1 record against the Browns.