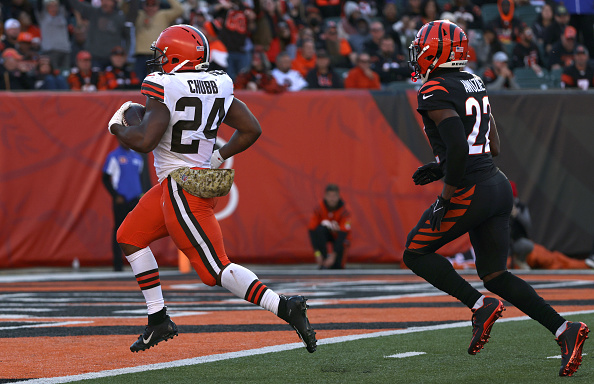 CINCINNATI, OHIO - NOVEMBER 07: Nick Chubb #24 of the Cleveland Browns runs the ball for a touchdown during the third quarter against the Cincinnati Bengals at Paul Brown Stadium on November 07, 2021 in Cincinnati, Ohio. (Photo by Dylan Buell/Getty Images)

After all the Odell Beckham Jr. drama from earlier in the week, and in a must win situation, the Browns went into Cincinnati and dominated the Bengals in every facet of the game Sunday and came away with a 41-16 win, a whole lot of confidence and showed they did not miss the soon to be cut wide receiver.

Denzel Ward made the play of the game on the Bengals opening drive as he picked off a Joe Burrow pass and returned it 99 yards for a touchdown and a 7-0 Browns lead.

Cleveland’s next big play occurred after the Browns defense held the Bengals on 4th down and gave the ball back to their offense. Then on the very first play, Baker Mayfield hit Donovan Peoples-Jones for a 60 yard touchdown pass and a 21-7 lead in the 2nd quarter.

Nick Chubb put the game away in the 3rd quarter when he busted off a 70 yard touchdown run for a 31-10 lead.

Mayfield finished 14-21 for 218 yards with 2 touchdowns and no interceptions.

Peoples-Jones finished with 2 catches for 86 yards and the 1 score.

The Browns defense forced 3 Bengals turnovers and sacked Burrow 5 times. Myles Garrett was credited with 1 ½ sacks giving him a league leading 12 sacks on the year. The Browns  won the turnover battle 3 to nothing.