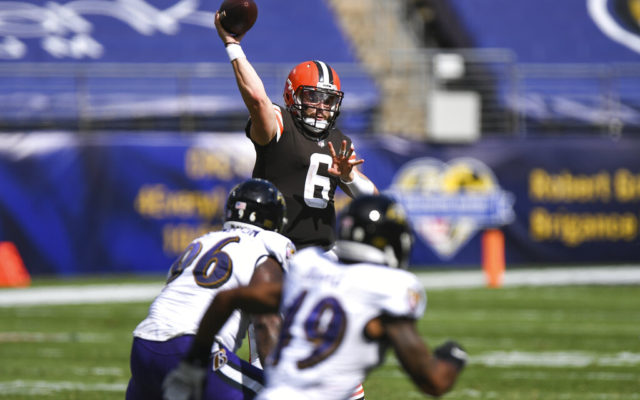 Cleveland Browns quarterback Baker Mayfield (6) passes the ball in the second half during an NFL football game against the Baltimore Ravens, Sunday, Sept. 13, 2020, in Baltimore. (AP Photo/Terrance Williams)

The Browns opened the Kevin Stefanski era, the same way they opened the Freddie Kitchen’s era, with an embarrassing loss.

The Ravens demolished the Browns 38-6 to drop Cleveland’s record in season openers now to 1-20-1 since they returned in 1999.

It all went wrong quickly for the Browns as Baker Mayfield was intercepted on Cleveland first possession. 8 plays later, Lamar Jackson hit tight end Mark Andrews on a 5 yard touchdown pass for a 7-0 lead, a lead they would never relinquish.

After a failed fake punt by the Browns, Baltimore increased its lead to 10-0 in the first quarter on a Justin Tucker 41 yard field goal and cruised from there.

Cleveland’s only touchdown on the day came on a 1 yard touchdown pass from Baker Mayfield to David Njoku, but kicker Austin Seibert missed the extra point.

Next up for the Browns, a home game Thursday night against the Cincinnati Bengals.