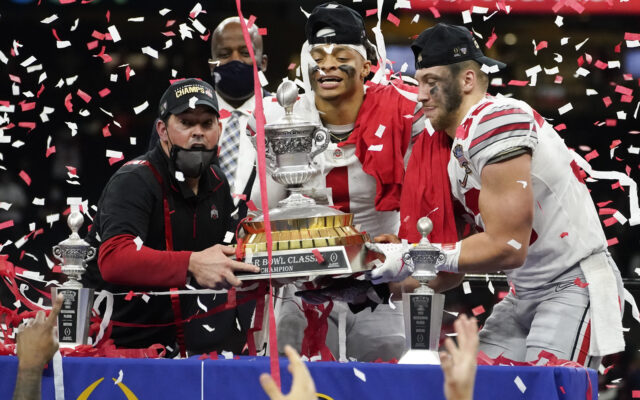 Justin Fields picked the perfect time to play his best game ever for Ohio State as he threw for 385 yards and 6 touchdown as the Buckeyes dominated the Clemson Tigers 49-28 in the Sugar Bowl and will now move on to play Alabama in the College Football Playoff National Championship game on Monday, January 11th in Miami.

Fields, who was coming off his worst game for O.S.U. in the 22-10 win over Northwestern, was playing with a bruised thumb on his throwing hand and he also injured his ribs in the first half against Clemson. But none of that mattered as the Tigers had no answer for Fields or running back Trey Sermon who rushed for 193 yards and a score in the rout.

Fields completed passes to 7 different receivers, but his favorite target, Chris Olave, who returned after missing the Big Ten Championship game because of covid issues, hauled in 6 throws from Fields for 132 yards and 2 td’s. Tight ends Jeremy Ruckert and Luke Farrell combined for 3 touchdown grabs, while wide out Jameson Williams caught the other td pass.

For Sermon, who ran for a school record 331 yards in the win over the Wildcats, he now has rushed for 524 yards and 2 touchdowns in the Buckeyes last 2 games while filling in for the injured Master Teague.

Despite giving up over 400 yards of total offense to Clemson, the Buckeyes defense forced 2 turnovers, sacked Trevor Lawrence twice and held the Tigers to just 48 yards rushing.

Alabama advanced to the title game by knocking off Notre Dame in the Rose Bowl 31-14 setting up the second meeting between the Crimson Tide and Ohio State in the College Football Playoff. Back in 2014, the Buckeyes defeated Nick Saban’s squad 42-35 in the semi-finals in route to winning the first ever College Football Playoff National Championship over Oregon.

The early betting line has Alabama favored by 7 points over Ryan Day’s Buckeyes.

You can listen to the National Title game on your home for Ohio State football in Stark County, News-Talk 1480 WHBC.