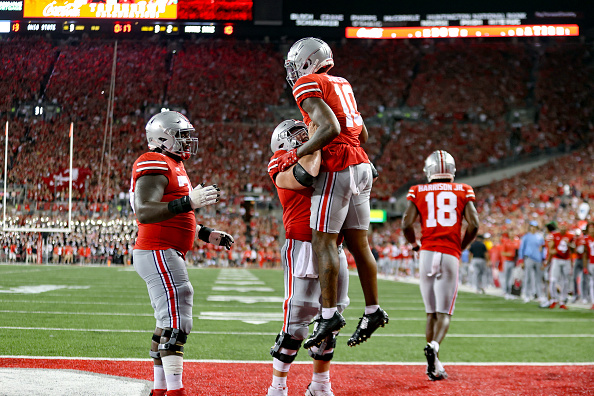 With the Buckeyes offense struggling for 3 quarters, Ohio State relied on defensive coordinator Jim Knowles new look defense to keep them in the game until C.J. Stroud and company scored 2 second half touchdowns to lift O.S.U. to a 21-10 come from behind win over Notre Dame.

Ryan Day’s squad trailed 10-7 at the half and was outplayed by the Irish in the first 30 minutes. But with the defense pitching a shutout in the second half, Stroud put the Buckeyes ahead for good late in the 3rd quarter when he connected on a 24 yard scoring strike to former walk-on  Xavier Johnson, who was playing because of an early game injury to Jaxon Smith-Njigba. That put Ohio State up 14-10.

Then a Miyan Williams 2 yard td run in the 4th quarter capped off a 14 play, 95 yard drive and gave the Buckeyes a hard fought 21-10 win.

TreVeyon Henderson led O.S.U. on the ground with 91 yards on 15 carries, while Williams added 84 yards on 14 carries and that td.

Emeka Egbuka was Stroud’s favorite target on the night, catching 9 passes for 90 yards and a touchdown.

Next up for the #2 ranked Buckeyes, a 12pm home game Saturday, September 10th against Arkansas State.