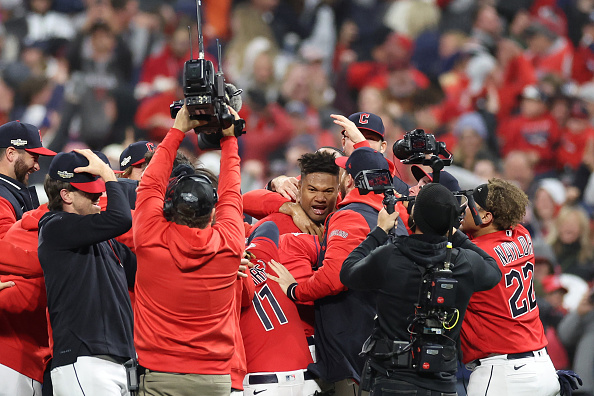 CLEVELAND, OHIO - OCTOBER 15: Oscar Gonzalez #39 of the Cleveland Guardians celebrates with his team after hitting a two run single during the ninth inning against the New York Yankees in game three of the American League Division Series at Progressive Field on October 15, 2022 in Cleveland, Ohio. (Photo by Christian Petersen/Getty Images)

Down to his last strike with his team down 5-4 with two outs in the bottom ninth inning, Oscar Gonzalez hit a two-run single to stun the Yankees and lift the Guardians to a 6-5 win over New York in game three of the ALDS and to give Cleveland a two games to one lead in the best-of-five series.

For Gonzalez, it was his third game winning hit this postseason for the Guards.

Cleveland overcame three Yankee homeruns, one of them a 449 foot two-run blast from Aaron Judge to steal the victory.

According to ESPN, the three-run ninth inning by the Guardians snapped a Yankees record of being 167-0 when entering the ninth inning leading by multiple runs!

While “Gonzo’s” hit was the game winner, Stephen Kwan and Jose Ramirez helped power the offense to that point, both going 3 for 5.

Eli Morgan, the fourth Guardians pitcher of the night got the win, while Clarke Schmidt blew the save and took the loss for New York.

Facing elimination in game 4 on Sunday, the Yankees will send Gerrit Cole to the mound, while Cleveland counters with Cal Quantrill. It’s a rematch of game 1 in which Cole and the “Bronx Bombers” won 4-1. First pitch at Progressive Field on on 1480 WHBC is set for 7:07pm.

If the Yanks win and even the series at 2-2, game 5 of the ALDS will be Monday in New York.

If the Guardians win, they’ll head to Houston to play the Astros in game 1 of the best-of-seven ALCS starting on Wednesday.