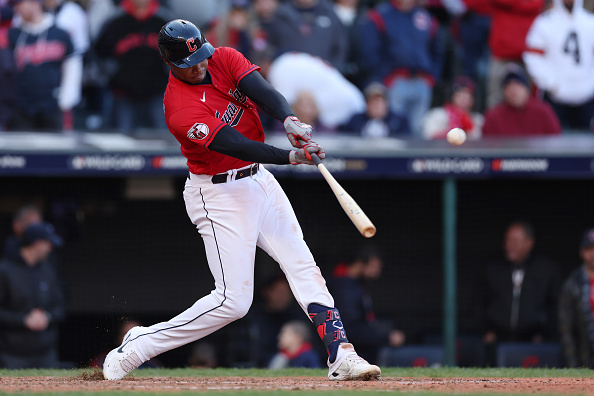 CLEVELAND, OHIO - OCTOBER 08: Oscar Gonzalez #39 of the Cleveland Guardians hits a walk-off home run to end the game in the fifteenth inning against the Tampa Bay Rays in game two of the Wild Card Series at Progressive Field on October 08, 2022 in Cleveland, Ohio. (Photo by Matthew Stockman/Getty Images)

Oscar Gonzalez hit a walk off game-winning, and Wild Card Series ending home run in the bottom of the 15th inning at Progressive Field on Saturday to give the Guardians 1-0 victory over the Rays. Gonzalez hit the series clinching dinger off former Indians pitcher Corey Kluber.

The 1-0 win, coupled with Friday’s 2-1 victory over Tampa, moves Cleveland into the American League Divisional Series starting Tuesday against the Yankees in New York.

Sam Hentges, the 8th pitcher used by Terry Francona, picked up the win in relief with 3 shut out innings.

José Ramirez‘s 2-run homer proved to be the difference in the 2-1 win in Game 1 on Friday afternoon for the Guards.
Stay tuned to WHBC, WHBC.com and the Kenny and JT show for more details on the best of 5 ALDS series with the Yankees.
More about:
Cleveland Guardians
Oscar Gonzalez
Rays
Wild Card Series
Yankees