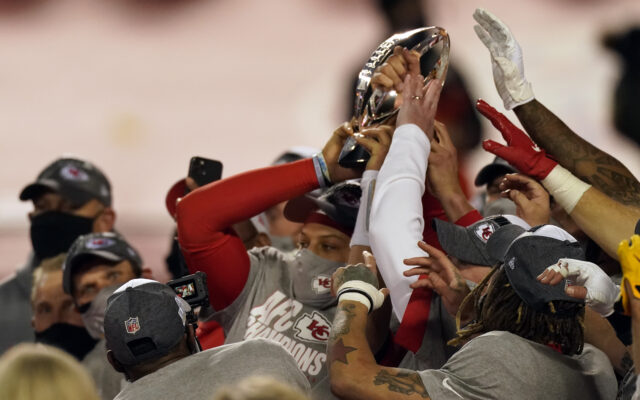 Super Bowl 55 in Tampa Bay is set, as the defending Super Bowl Champion Chiefs will battle the Buccaneers for the Vince Lombardi Trophy on February 7th at 6:30pm.

In the NFC Championship game, Tom Brady, in his first year in T.B., led the Bucs to a 31-26 win over the Packers in Green Bay, The 43 year old quarterback threw for 280 yards and 3 touchdowns in the win.

In the AFC Championship game, Patrick Mahomes returned from a concussion suffered in last week’s win over the Browns to throw for 325 yards and 3 scores to lead Kansas City to a 38-24 victory over the Buffalo Bills.

The Chiefs will be trying to win back-to-back Super Bowl titles and third overall.

The Buccaneers, who become the first team ever to play in a Super Bowl on their home field, will try for their second Super Bowl Championship in franchise history.

For Tom Brady, this is Super Bowl appearance number 10, but his first in a uniform other than the Patriots. Brady is 6-3 so far in his career in the NFL Championship game.

These same two teams already played this season. It was week 12 in Tampa, and Kansas City prevailed 27-24.

The oddsmakers have made the Chiefs an early 3 1/2 point favorite in Super Bowl 55, February 7th in Tampa.