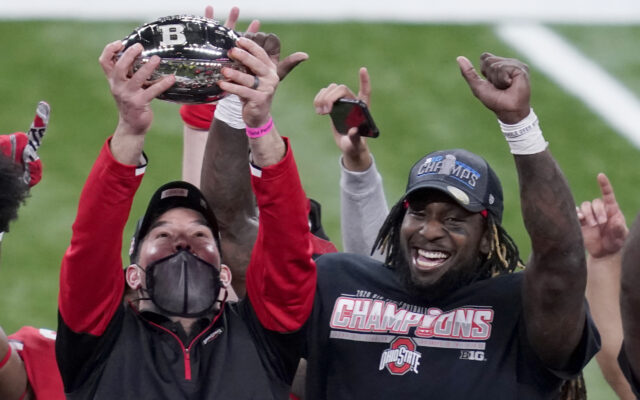 For the second year in a row and for the fourth time in school history, THE Ohio State Buckeyes are headed to the College Football Playoff.

It was announced on Sunday on the CFP Selection Show that the (6-0) Buckeyes, Champions of the Big Ten, will be the #3 seed in The Playoff  and will face the #2 seed, Clemson in the Sugar Bowl in New Orleans at 8 p.m. on ESPN.

This is a rematch of last year’s semi-final, a game Ohio State lost to the Tigers 29-23, as quarterback Justin Fields comeback attempt ended with an interception in the end zone with :37 left in the game.

Ohio State is listed as a 6.5 point underdog vs Clemson.

The Buckeyes have never defeated the Tigers on the football field, they are 0-4 all-time including last year’s Playoff loss and a 31-0 Playoff loss in 2016.

Alabama was selected by the committee as the #1 seed and they will face the #4 seeded Fighting Irish of Notre Dame in the Rose Bowl at 4 p.m. on ESPN.

It was announced yesterday that the Rose Bowl game was moved out of California to Texas because of Covid-19 related issues and because no fans would be allowed to attend the game in Pasadena.

The two semi-final winners will then meet in the College Football Playoff National Championship Game at Hard Rock Stadium in Miami, Florida on January 11th at 8 p.m. on ESPN to crown this year’s National Champion.