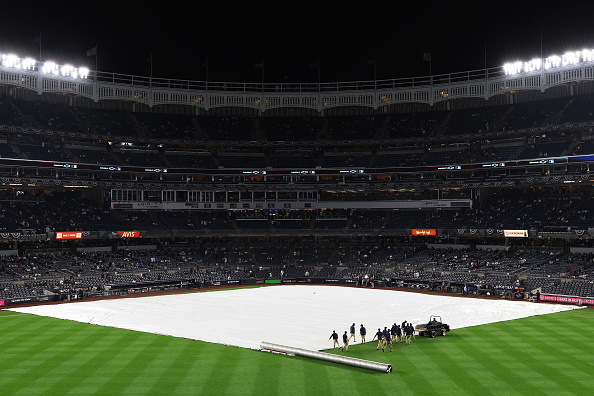 NEW YORK, NEW YORK - OCTOBER 17: A tarp covers the infield prior to game five of the American League Division Series between the Cleveland Guardians and New York Yankees at Yankee Stadium on October 17, 2022 in New York, New York. (Photo by Jamie Squire/Getty Images)

Game 5 of the American League Divisional Series was rained out in New York on Monday Night.

Major League Baseball waited until about 9:30pm to make the announcement.

The 5th and deciding game will be made up on Tuesday, October 18th with the first pitch at 4:07pm.

Nestor Cortez has been named the starting pitcher for the Yankees, while the Gaurdians have yet to officially name their starter. Aaron Civale and Shane Bieber are possible candidates to get the nod for Terry Francona’s squad.

You can hear the game on News-Talk 1480 WHBC beginning with the pregame show at 3:35pm.

The winner of Game 5 will move on to the American League Championship Series to face the Astros in Houston in the best-of-7 series beginning Wednesday night.