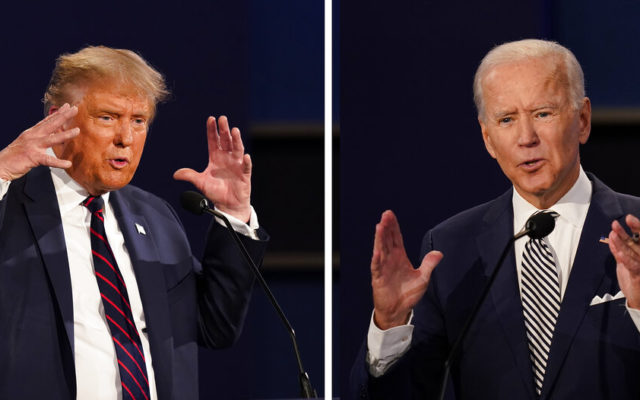 Democratic Presidential Candidate Joe Biden and his wife Jill will take a train from Cleveland Wednesday morning following the debate Tuesday night and make stops in Eastern Ohio and Western Pennsylvania.  Biden plans a “whistle stop” in Alliance at 11:45am and then he will head to Johnstown, Pennsylvania on what the Democrats are calling the “Build Back Better Express” train tour.

According to a media release, Biden will talk about building America’s economy during three whistle stops, the first of which is scheduled for the Amtrak station in Alliance shortly before noon Wednesday.  President Donald Trump is headed to Minnesota.
So last night was filled with contstant interruptions, insults and an overall lack of substance.  The next debate is set for Florida on October 15th.
Both men spoke over each other, at each other – and the debate moderator Chris Wallace – in what social media has decreed was an absolute free-for-all. Before the 90-minute event was over, both men accused each other of being liars, clashed over the response to the coronavirus, the economy, race relations and climate change.
More about:
Biden
debate
tour
trump