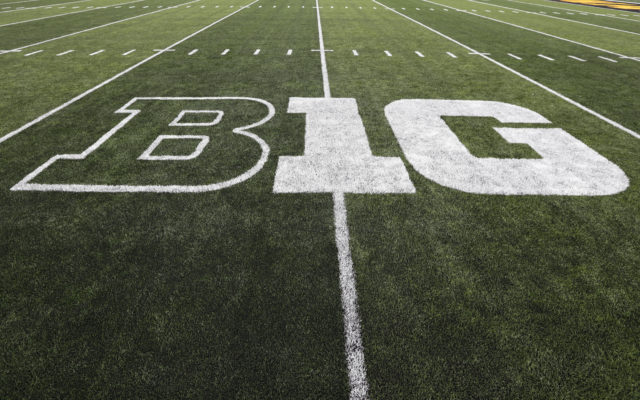 The Big Ten logo is seen on the field before an NCAA college football game between Iowa and Miami of Ohio, Saturday, Aug. 31, 2019, in Iowa City, Iowa. (AP Photo/Charlie Neibergall)

The Buckeyes opened Big Ten play with a gigantic win against Rutgers last Saturday. It  seemed the Scarlet Knights had a better defense, good coaching, and could keep it close. Five  C.J. Stroud Touchdowns later and Ohio State is prepping for Markland. With playoff hopes alive, Ohio State continues to watch the rest of the conference. Beginning this week, the Big  Ten will begin their march into mid-season madness.

Michigan made big news with their first win in Madison since 2001. Wisconsin was predicted  to be the only real competition to Ohio State in the Big Ten. Yet, Saturday they found  themselves 38-17 losers to Michigan at home for their second loss of the season. Ohio State  winning big, Michigan winning big, Wisconsin’s realization of a lost season, and Rutgers  coming back to reality were all just a taste of what’s coming

The most recent AP top 25 poll has five Big Ten teams in the top 15. Iowa at #3, Penn State  at #4, Ohio State at #7, Michigan at #9, and Michigan State at #11. In a perfect world, Ohio  State plays all of these teams while they’re undefeated and makes the playoffs.  Unfortunately, the world isn’t perfect and everyone in the Big Ten is about to see that.

Iowa and Penn State have both had dream seasons, undefeated and in the top four.  Unfortunately, the dream season is in danger for one of these teams this Saturday. Penn  State will travel to Iowa for a top five matchup nobody expected. Ohio State watches  believing Penn State will be their toughest regular season opponent and Iowa will most  likely their Big Ten Championship opponent. This is just the first in a slew of meaningful matchups coming up.

The coming weeks will see the Big ten collide and explode, most likely changing the top 25  every week. Michigan, Michigan State, Wisconsin, and Penn State will all see each other at  some point this season. These game will constantly shake up the rankings and offer chances for the Buckeyes to move up in the top 25.

The Big ten championship is a while away but can be broken down. Iowa plays Penn State  Saturday, then finishes the season without any other ranked opponents. Win or lose, Iowa  will most likely be in the big ten title. Penn State, Ohio State, and Michigan all have big

match-ups with each other. Penn State will play Iowa instead of Michigan State, a game that  will most likely define their season. Whichever of these three teams win out will play Iowa in  the Big Ten Title game.

With so much football left, a lot can happen in the Big Ten and College Football. Stay tuned  with updates and breakdowns at whbcsports.com and tune into Ohio this Saturday on 1480  WHBC with pre-game at 10:30 and kickoff at 12:00.