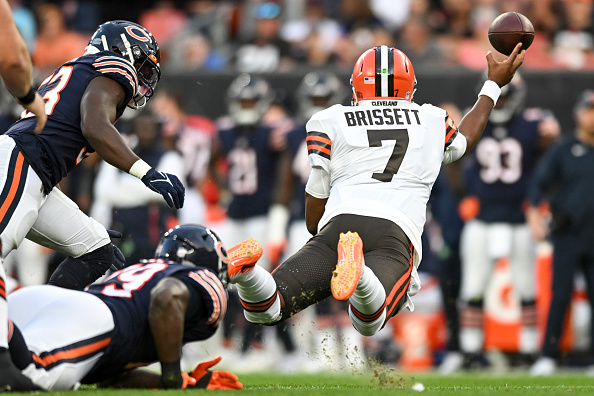 CLEVELAND, OH - AUGUST 27: Jacoby Brissett #7 of the Cleveland Browns throws a pass as he is tripped by Trevis Gipson #99 of the Chicago Bears during the first half of a preseason game at FirstEnergy Stadium on August 27, 2022 in Cleveland, Ohio. (Photo by Nick Cammett/Getty Images)
The Browns closed the preseason with a 21-20 loss at home to the Bears to finish (1-2) in the exhibition games.
Jacoby Brissett, who will start at quarterback in the regular season for the Browns in place of the suspended Deshaun Watson, started and played late into the second quarter leading one scoring drive, which ended in a 57 yard field goal from rookie kicker, Cade York.
For the game Brissett finished 13 of 23 for 109 yards with no touchdowns and 1 interception.
Tight end, Miller Forestall and third string quarterback Josh Rosen scored the Browns two touchdowns, while York went 2 for 3 in field goal attempts.
Next up, Browns general manager Andrew Berry and the front office will have to trim the roster to 53 players by 4PM on Tuesday, August 30th.
Then head coach Kevin Stefanski will get the team ready for the season opener on the roadat Carolina, September 11th, against Baker Mayfield and the Panthers.
More about:
Cleveland Browns
Jacoby Brissett