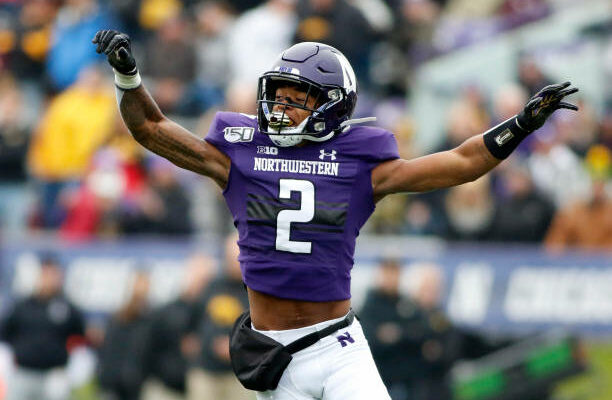 EVANSTON, ILLINOIS - OCTOBER 26: Greg Newsome II #2 of the Northwestern Wildcats reacts after a play in the game against the Iowa Hawkeyes at Ryan Field on October 26, 2019 in Evanston, Illinois. (Photo by Justin Casterline/Getty Images)

With the 26th overall pick in the first round of the 2021 NFL draft, the Cleveland Browns selected cornerback Greg Newsom II from Northwestern.

The 6’0 – 190lb corner, was first team All Big Ten and third team All-American this past season for the Wildcats.

Newsome II picked off one pass last season and broke up 10 others for Pat Fitzgerald‘s defense.

Browns general manager Andrew Berry singled out Newsom II as a “smart, tough and accountable” player at Northwestern which fits the Browns profile. Berry also noted that Newsome II can play both man-to-man and zone coverage.

Ourlads NFL Scouting Service head scout, Dan Shonka had this to say about Newsome II after the first round was complete, “Newsome is willing and physical in run support, quick hands, tackles well in space and is fast.

Next up for the Browns in day two of the NFL Draft, one pick in the second round and two selections in the third round.