Canton Man Wanted for Kidnapping and Rape – Still at Large 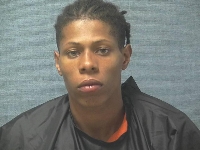 Canton Police are looking for a 22-year old Canton man who they believe held a woman and another person hostage in her appointment at gunpoint and also raped her.  Police say hee took off in her car and is still at large and is considered armed and dangerous. A warrant has been issued for Randy Blanding of 3rd Street SE. He’s facing charges of aggravated burglary, aggravated robbery, rape, kidnapping, and more.
He has other warrants also for stalking.   Anyone with information can send a tip through the tip 411 line.

Mr. Blanding also has previous arrest warrants unrelated to this incident for Menacing by Stalking and Failure to comply with Police involving the same victim.

The investigation is continuing at this time. Anyone with any information on the whereabouts of this individual is asked to contact the Canton Police Detective Bureau, at (330) 489-3144. Anonymous tips can also be sent through Tip411 or the Stark County Crimestoppers. Sign up for Tip411 at www.cantonohio.gov/police