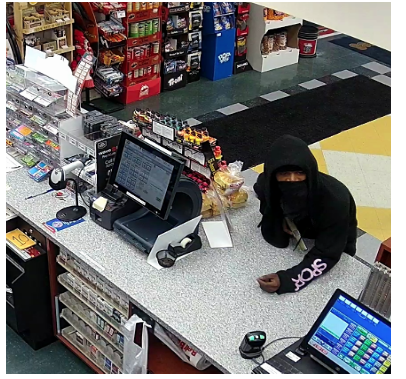 Canton Police are investigating two armed robberies that took place last week and they are asking for the community’s help in identifying the suspect.  They report:

On January 17th at approximately 07:45A.M. officers were dispatched to 3812 Cleveland Ave. N.W. (Bell Stores) reference to an Armed Robbery.  Store representatives state that a black male dressed in a black hoody, grey pants, white shoes and wearing a black face mask approached the clerk, brandished a handgun and demanded money from the register.  After receiving an undisclosed amount of cash, he left the store and fled on foot in a northeast direction.

On January 18th at approximately 05:33A.M., the same subject entered 2535 Fulton Rd N.W. (Circle K), brandished a handgun and robbed the clerk at gun point.  After receiving undisclosed cash, the subject left the store on foot in a north direction.

The investigation is continuing at this time. Anyone with any information in regards to these crimes are asked to contact Canton Police Detective M. Walker at (330) 438-4423. Anonymous tips can also be sent through Tip411 or the Stark County Crime Stoppers. Sign up for Tip411 at www.cantonohio.gov/police