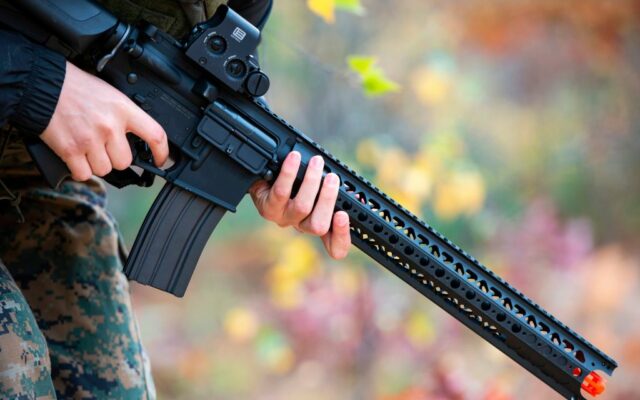 Militia members return fire during an ambush as they practice a two person patrol using airsoft rifles that resemble their AR-15 weapons, as part of their training exercises in the woods of southern New Hampshire on October 25, 2020. - The unit has upwards of 30 members, and is about one year old, but only two allowed themselves to be photographed as part of this story. The Militia is training to help out the US in preparation for a worst case scenario, such as the invasion of a foreign power. "I just want to say, like, we believe in the Constitution. We believe in the Bill of Rights. We're all willing to fight and umm, defend it. Even potentially die to preserve that." said a militia member. (Photo by Joseph Prezioso / AFP) (Photo by JOSEPH PREZIOSO/AFP via Getty Images)

What needs to happen to slow down this dangerous trend? What is the reason for so many mass shootings in recent weeks? Jon spoke with Dr. Daniel Flannery, the Director of the Begun Center for Violence Prevention Research & Education at Case Western.