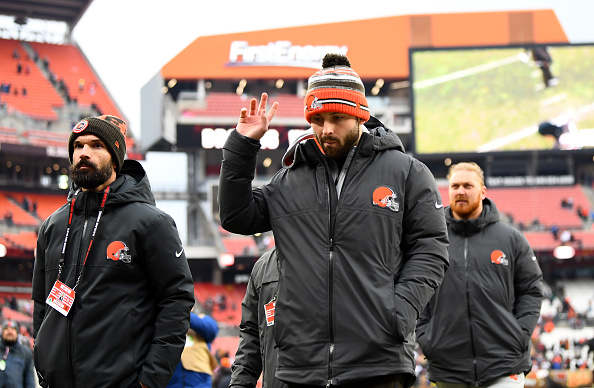 CLEVELAND, OHIO - JANUARY 09: Baker Mayfield #6 of the Cleveland Browns reacts as he walks off the field after Cleveland defeated the Cincinnati Bengals 21-1 at FirstEnergy Stadium on January 09, 2022 in Cleveland, Ohio. (Photo by Emilee Chinn/Getty Images)

Cleveland head coach Kevin Stefanski told the media at the Browns final week of voluntary OTA’s on Wednesday that quarterback Baker Mayfield has been excused from next week’s mandatory “Mini-Camp” and he won’t be fined.

Stefanski said it was a mutual decision made by the Browns and Baker’s team in the best interest of both parties involved.

Mayfield is still recovering from off season left shoulder surgery and has been replaced as the Browns starting quarterback by Deshaun Watson who was acquired in a trade this off season.

No word yet if Mayfield will be excused from mandatory Browns training camp which begins at the end of July.