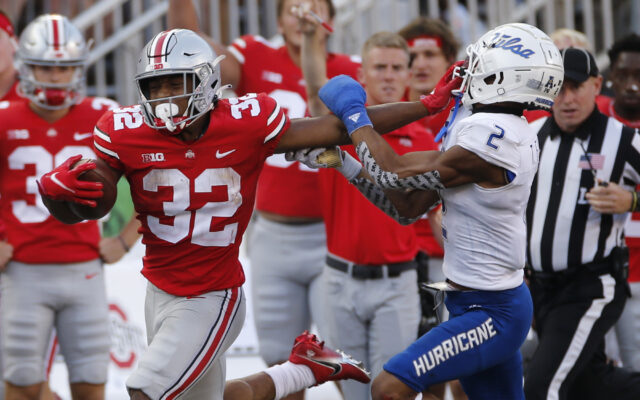 Good- TreVeyon Henderson: The Plan from the beginning was to lean on Senior Master Teague III while easing in the next generation with Miyan Williams and TreVeyon Henderson. Besides a highlight 70-yard screen pass against Minnesota, Henderson has watched Teague III and Williams get the bulk of the carries through two games. With Williams out Saturday, Henderson chose to make the most of his opportunity against Tulsa.  The Freshman’s big day included 24 carries for 277 yards and three touchdowns. Master Teague III has been solid, but two years in a row have seen another back overshadow him. Henderson arrived in the spring as a five-star recruit and the #1 running back in his class. Despite a slow start, it seems he may be emerging as the next big Buckeye name at running back.

Bad- The Defense:  It was revealed after the game that Matt Barnes not Kerry Combs, was calling plays on defense. Ohio State had two dismal performances and the entire state of Ohio called for a change. While the Buckeyes gave up their smallest amount of points this season, it didn’t feel like an improved effort. Davis Brin threw for a career high 428 yards and two touchdowns. Josh Johnson caught eight balls for 149 yards and a touchdown. These are concerning stats, but the true issue is Ohio State should have known that Brin throwing to Johnson was the game plan. On the bright side the buckeyes had an interception, a pick six, and two sacks.  Next week’s game against Akron won’t provide much clarity thus, Buckeye fans are forced to sit and wonder what kind of defense they have.

Good- AP Poll:  While Ohio dropped back a spot to #10 in the AP, the rest of the Big Ten is well represented. The Buckeyes will now have 3 ranked opponents on their upcoming schedule, plus a Big Ten Championship opponent if they win out. Penn State  moved up to #6, Michigan moved up to #19, and Michigan State enters the top 25 for the first time this season at #20. Wisconsin at #18 and Iowa at #5 will also be possible Big Ten Championship opponents if Ohio State can run the table for the rest of the year. A schedule with more ranked opponents will of course better Ohio State’s chances as a one loss playoff team. It may feel odd to root for Michigan to win now, but it will pay off in the long run.

Bad- C.J. Stroud: By no means is C.J. Stroud a bad quarterback, nor has he had a bad season. The freshman has played very well and has made some highlight plays. Overall, fans aren’t impressed by what they hoped would be an electric and standout freshman. A lack of improvement on glaring issues and a newly added shoulder injury have many wondering if Ohio State should dip into their loaded quarterback room. For now, Coach Day chooses Stroud’s big play ability over a possible well oiled machine offense that Kyle McCord or Jack could offer.