These Squirrels are NUTS! You’d better keep an eye on YOUR Vehicle this Fall! 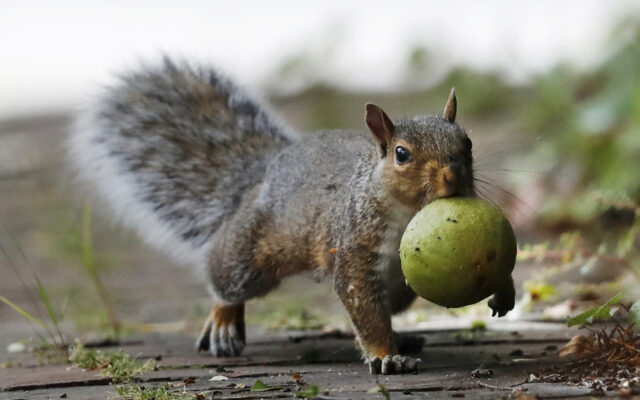 In this Tuesday, Sept. 11, 2018 photo a squirrel carries a walnut in Portland, Maine. A bumper crop of acorns, pine cones and other staples last year led to a population boom of squirrels. (AP Photo/Robert F. Bukaty)

A North Dakota man who recently returned from a four-day trip found his Chevy Avalanche had been broken into. However, instead of taking anything, the burglar left something behind: More than 175 pounds of black walnuts.
Fargo resident Bill Fischer says a squirrel stashed the walnuts under the hood of his pickup, stowing them between engine parts, hoses and spark plugs. It took him more than seven hours to remove most of the nuts, which filled seven five-gallon buckets, Fischer says. “Some of the nuts I am unable to retrieve,” he says. “They are hidden inside the frame.”
Although it wasn’t the first time a squirrel used Fischer’s truck as a hiding place, he says, “This year was a record.”