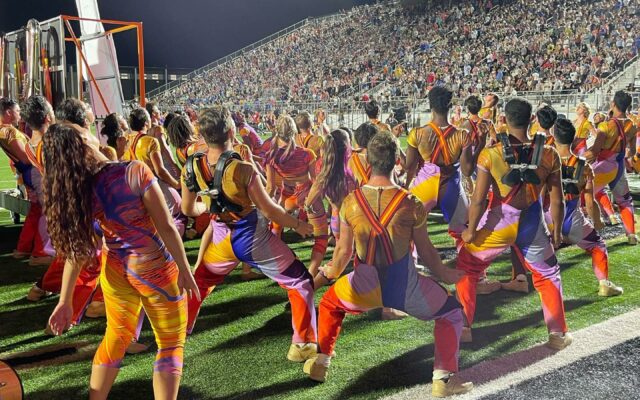 Last night’s Drum Corps International competition in Broken Arrow, Oklahoma almost became a standstill exhibition.  DCI officials and corps directors met a couple of hours before the show was to begin to decide whether it was safe for the corps to give competitive performances in the stiffling 107 degree heat. Last night’s DCI show in Lawton, Oklahoma,  where the temperature reached 112, was decided to be a standstill, non-uniform exhibition. At Broken Arrow it was determined that by delaying the start time of the show would afford the corps the opportunity to compete so “on with the show.”

The show featured eight World Class corps including the current top five ranked units. A large crowd of several thousand turned out despite the heat and were treated to great performances by all of the corps. Coming out on top was the nineteen time DCI World Champion Blue Devils, from Concord, California with a score of 89.2.   Placing 2nd with a score of 87.5 was Carolina Crown from Ft. Mill, South Carolina. The Canton, Ohio Bluecoats placed 3 rd with a score of 87.175.

The Bluecoats will now move into Texas for shows on Thursday in Denton, Friday in Houston and Saturday in San Antonio. The San Antonio show will be the first “major” competition of the season with 19 of the World Class corps taking part.
Tickets are now on sale for the August 8 “DCI Tour of Champions – Akron” to be held at Infocision Stadium. The show will feature eight DCI World Class corps and the 400+ members of the Bluecoats 50 th Anniversary alumni corps. Tickets can be purchased online at the Bluecoats or DCI web sites.

About Bluecoats – Founded in 1972, the Bluecoats organization celebrates its 50th anniversary this year with the first competitive national tour of the Bluecoats Drum &amp; Bugle Corps since the Covid-19 pandemic canceled the 2020 season. The organization, founded as a program for the young people of Canton to have a place to play music and perform, has since grown to become one of the world’s greatest drum &amp; bugle corps programs, and a world-renowned voice in performing arts education.

The organization has focused on bringing this incredible programming back into the Canton community in the spirit of its founding. Newer programs like THE BLUE WAY
Summer Experience Camps, a partnership with the En-Rich-Ment Drumline, Play It Forward, Bluecoats School of the Arts, and Learning Access all direct the amazing educational resources into the Bluecoats Community. This year, as a part of the 50th Anniversary, Bluecoats launched the Bluecoats Fellowship and the Champion Award, two programs designed to honor people who
make an impact in their communities.